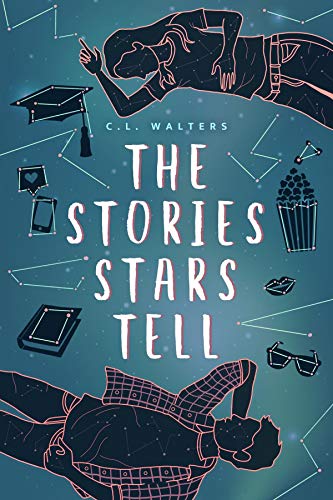 About The Stories Stars Tell by CL Walters

Emma-Christian daughter of Mo and Amy Matthews, big sister to Shelby, lover of John Hughes films, and Salutatorian of the senior class-has spent her entire high school career playing it safe because she stifles her risk-taking gene for perfectionism instead. This behavior isn’t necessarily because that’s who she is, but because of all of those external expectations wrapped up in her parents’ approval and the religious messages she’s grown up believing. She’s not a perfect girl; she just feels like she’s supposed to be. Now, she’s headed to college in the fall ill-equipped to face the challenges of real life. Though that one time junior year when she got drunk for the liquid courage to coerce Tanner James into kissing her might be an outlier, unlike most of her well-laid plans (even if she got what she wanted), she took the calculated risk to squash her infatuation for Tanner and it didn’t work. She still wants to have sex with him.

Like Emma, Tanner hasn’t forgotten that kiss junior year either, but for entirely different reasons. Party f-boy extraordinaire has reached high school graduation without options-a dead end. He’s made choices rooted in the expectations of his friends and their pact: the Bro Code. Except, he’s tired of the party life and the Nowhere it leads. That junior-year kiss changed something in him, and now he’d rather be at home reading his favorite book. As graduation and the great empty beyond looms, Tanner questions every choice he’s made. This upheaval unravels the protective box he’s built to insulate himself for all the real stuff he’s been avoiding, namely his older brother’s death and the volatile divorce of his parents.

One week before high school graduation, Emma and Tanner find themselves face-to-face at the edge of a cliff at the Quarry when it’s time for the partner-jump during the traditional Senior Send Off. Under the light of the stars, they both face the terrifying adventure of making a different choice. Tanner asks Emma to be his partner; Emma says, “yes,” both risking everything to write a new story they’d thought had already been written. It’s just that change always has a price.

Beautifully written coming of age story that transports me back to my own senior year of high school and graduation. Every reader will be able to relate and identify themselves in one of the characters. In The Stories Stars Tell CL Walters covers real, difficult, life topics and feelings that teenagers face in a way that’s enjoyable to read about.

Emma and Tanner are incredibly likable characters that immediately find a home in your heart as they struggle to find their own identities while attempting to live up to the expectations of the people in their lives.

If you only read one book this year, make it The Stories Stars Tell by CL Walters.

Get The Stories Stars Tell by CL Walters here.

Learn more about CL Walters and her books here.

New Adult Author / Ankylosing Spondylitis Warrior and Founder of KickinAS.com #Kickinas / Avid Cook / USMC Reserves Veteran / Entrepreneur / Founder of IT'S A WRITER'S LIFE FOR ME #ITSAWRITERSLIFEFORME / Co-Creator of The Spooky Bitches of Lubbock View all posts by Michelle C. Hillstrom

Follow It's a Writer's Life for Me on WordPress.com